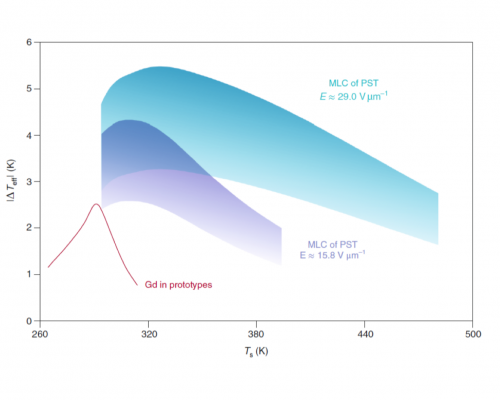 Upon invitation from Nature Materials, Mojca Otoničar from Electronic Ceramics Department, Jožef Stefan Institute, and Brahim Dkhil, leader of ‘Advanced Ferroics’ group at CentraleSupelec, University of Paris-Seclay wrote an opinion for News & Views – Electrocalorics hit the top (published October 24, 2019). They comment on an article published in Nature (published online October 9, 2019), in which a team of researchers led by Xavier Moya and Neil Mathur from the University of Cambridge, in collaboration with partners from Murata, Japan, reported on multilayer capacitors, which exhibit an extremely high electrocaloric response (5.5K), forecasting a breakthrough of the alternative cooling technology. In addition to the significance of the multilayer design with alternating layers of lead tantalate scandate (PST) and platinum electrodes, the authors demonstrated both the importance of chemical ordering in the structure of PST, and the proximity of its critical point. This allows the material to be brought into a ‘supercritical’ state by an electric field, thus achieving a strongly enhanced electrocaloric response.